Back in April, the Heritage Council and HeritageMaps.ie released the latest dataset mapping Ireland’s mysterious Sheela-na-Gigs. The press coverage generated a big boost in visitor numbers to the mapping resource.  Blame the Sheelas.

Speaking about the new Sheela-na-Gig map, Michael Starrett, Heritage Council Chief Executive explained that “HeritageMaps.ie a fantastic tool for learning, discussion and interpretation, making cultural data available to everyone. We can all learn from it and in many ways explode myths that have grown up and allow contemporary and very enlightened debate to occur. Our Sheela-na-Gig’s deserve no less.” 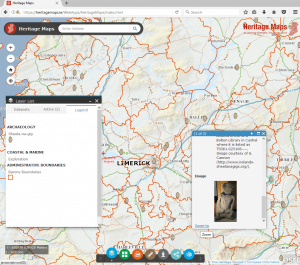 Discussing the launch of this new cultural resource and the St. Patrick connection, renowned UCC folklorist Shane Lehane suggests “that perhaps the key to understanding the inherited notion that St Patrick had a wife, Sheela, is to explore the hugely interesting archaeological manifestation that also bears her name: the Sheela-na-Gig”.

“In Ireland, there are over 110 examples of these, oft misunderstood, medieval stone carvings of naked, old women exposing their genitalia. They are often positioned in medieval tower-houses, medieval church sites and holy wells. Up to recently these were seen as figures representing the evils of lust or as ways of averting the ‘evil eye’. More convincing reassessments have reinterpreted the Sheela-na-gig, in line with the Cailleach, as belonging to the realm of vernacular folk deities associated with the life-giving powers of birth and death. Placed with the cycles of both the natural and agricultural year and the human life cycle, she can be regarded as the embodiment of the cycle of fertility that overarches natural, agricultural and human procreation and death”.

Speaking about the launch of the Sheela-na-Gig map, Beatrice Kelly, Heritage Council Head of Policy & Research, stated, “Sheela-na-Gigs are very evocative symbols of the feminine in old Irish culture and their prominent positions in medieval churches and castles attests to the importance of the female in Irish society. As modern Ireland strives for equality in all aspects of life this map can help us all to understand the important place women have traditionally held within our culture and society.”

Explaining how the map was created, Pat Reid of HeritageMaps.ie said “we used publically available National Monuments Service open-data to create the base for this map. We augmented this with images and information gathered from the museum sector and Sheela-na-Gig academics and enthusiasts. This Sheela-na-Gig dataset is just one of many bespoke datasets we hope to provide in this manner. Our aim is to create interest and awareness, and to facilitate further research, in the varied and diverse elements of our cultural heritage.”

HeritageMaps.ie has been developed by the Heritage Council and a range of partners including the local authority Heritage Officers. There are over 600 datasets displayed in map form available on the viewer, with over 150,000 mapped points of heritage and cultural interest. HeritageMaps.ie allows people to create customised maps and explore a vast range of Ireland’s heritage including pilgrim paths, burial grounds, museums, archaeological sites, maritime collections and walled towns – all from their phone, tablet or desktop.

HeritageMaps.ie has been developed by the Heritage Council, working over the past 18 months with local authorities, the National Biodiversity Data Centre, the Discovery Programme, and Compass Informatics.

Compass Informatics have worked with the Heritage Council over recent years to develop the HeritageMaps.ie resource.

We have renewed our longstanding partner status with Esri Inc. with a renewed emphasis on leveraging the power of the Esri ArcGIS Enterprise suite.  We will continue to include Esri
Events, Latest News
We are really positive about the road ahead for Compass Informatics, working with key clients and our planned new opportunities. As part of this we continue to develop our organisation
Events, Latest News

We have a brilliant team and client organisations that have been hugely supportive to our team as individuals and to the company over recent months.  To say a thank you to colleagues and friends, the Compass Informatics founding company has made a significant donation to the Mater Foundation to enable new equipment to be bought and to further build the Mater’s medical capabilities.

Events, Latest News
We use cookies to ensure that we give you the best experience on our website. If you continue to use this site we will assume that you are happy with it.Ok